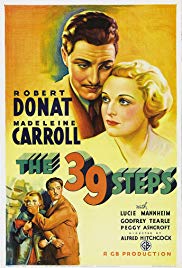 A man in London tries to help a counter-espionage Agent. But when the Agent is killed, and the man stands accused, he must go on the run to save himself and stop a spy ring which is trying to steal top secret information.

Before: This is my first Hitchcock film, and I have no clue what to expect from it. But ‘everyone’ says they are amazing and I know it’s a favourite of a number of my friends.

After: I can honestly say that I didn’t guess the end. But also I’m so confused about the timing. And the opening premise… I think I enjoyed it though.

Accidentally discovering a secret and having to go on the run and try to save the day is really good idea. And the proof that it’s a good idea is the fact that this story is still being told and used now. This film has had 2 remakes, most recently in 2008.

As I was coming into this film completely blind I enjoyed seeing the classic story being told in one of it’s first incarnations.

I’m a fan of accidental spy stories and it’s weird to think that it had to start somewhere and that this is one of those starting points. It’s such a well known trope that you just get used to it being there.

Okay so I need to start with the fact that the timing doesn’t seem to make sense, because really? I’m so confused as to what the timings are in this film. There’s no sense of how long it’s been between each scene/moment, some scenes it’s obviously straight after but others? Nope, no clue.
There’s a moment between Hannay and Pamela which seemed to sum up my confusion, within a minute these two sentences came up, “I met you on the train last week”/”For all you know I killed someone not 4 days ago”. Surely these two things contradict each other? I’m also aware that it probably isn’t worth all the energy that I spent being confused about it. I spent far too long trying to work out how long it had been which pulled me out of the film multiple times. I’m sure the answers were actually there but I missed the clues.

Also! Also! WHY WAS HANNAY NOT KILLED AT THE VERY BEGINNING OF THIS FILM AND WHY DID THEY THINK HE KNEW ANYTHING?

Seriously though, they kill the agent by stabbing her in the back, so they are obviously close enough to be able to murder Hannay at the same time. If they think he knows something why do they let him live? I know it’s needed for the plot but it seems like a big plot hole. AND WHYYY do they think he knows anything? What kind of agent tells a random stranger that she goes home with for the night? She’s supposed to be an amazing agent/spy and yet she just tells a random dude that she only met maybe an hour ago. Maybe an hour. Pretty terrible agent.
They spend so long trying to kill this guy and I don’t know why they think he’s a threat to begin with – once he starts telling people that he knows a secret then fair enough. But why do it to begin with? Although I get why the ‘normal’ police are chasing him, he’s run away and there’s a body with a knife in it’s back in his room. But why do the bad guys think that he knows anything the agent knows???

It sounds like I didn’t like it, I did. I think, don’t know if I’ll watch it again but throughout the film those two big things just kept jumping out at me pulling me out of the story. Which is possible why I missed the clues about how long it had been between scenes.

The ‘relationship’ between Hannay and Pamela felt very contrived and there is literally no reason for her to appear to fall for him, apart from the fact that he’s the leading man. But I liked Pamela, she seems to have ‘spunk’ and is constantly fighting Hannay and doesn’t take his BS. There’s no reason for her to believe him to begin with and so she fights against. Yes I don’t think they work as a couple, but I like her as a person, she’s an actual person.

Finally it’s worth noting that I didn’t guess the end but I thought it was really cleverly done, the clues were all there I just wasn’t picking them up.

I didn’t notice any music in this film apart from what Hannay was whistling throughout. But at the time film soundtracks were not a thing and music was used sparingly.

I’ve already mentioned what I thought about Pamela, she’s definitely a supporting character rather than a leading lady as she’s not in a good half of this film whilst Hannay is in almost every scene.
The agent is clearly bad at her job and is such an obvious agent, no one runs between windows when they walk into a room – it just makes them look more suspicious – and she told a stranger all the info that she knew because…. because plot.
The innkeeper has a wife who doesn’t want to spill the information about Hannay and Pamela because she thinks they are a cute loved up couple. Scottish Highlander dude has a wife who he kisses pretty much straight away, and is devastated when he leaves… because plot. And Scottish rich dude has a wife who walks in to say that lunch is ready… otherwise those are the only female characters I can think of.
Like I said this film was made in the 30’s where women were there to fall for the leading man and snog him, or be a sexy and terrible spy.

As for Hannay… I can believe that he’s been thrown into this mess and has absolutely no clue what to do and goes on the run. As for why he trusts the police that one time? It’s the 30’s and he’s certain that the ‘truth will out’ and ‘justice will prevail’. Basically he’s too naive to think that the police might actually doubt him because even though his story is mad it’s real.
He makes a few jumps of logic but I can follow most of his decision making and understand why he chooses to do what he does. He isn’t suddenly amazing at spy stuff and it pretty rubbish at being on the run. There’s no secret skills that appear from nowhere, is actually your every day middle class/middle age white man from the 30s.

Did I enjoy it? I think I was too busy being confused to enjoy it, but when I was actively putting that confusion to the side it was good fun. But I was confused more than not
Am I glad I watched it? Yes. Just to say that I’ve watched ‘a’ Hitchcock although I know it’s not going to be the last with this project.
Would I watch again? Probably not but I might watch a remake, just to see what they do with it and if they clear up my confusion.
Would I have watched it if not for this challenge? No

My next film is… I don’t know yet.

For every fourth film instead of continuing down my alphabetical list I’m going to pick a different film. One from later in the list, maybe one that I’ve watched before and love, maybe not. That way I get a semblance of choice and allows a break in a run of films that I might not be sure about/know anything about.