‘There is a very specific sensation, right in the pit of your stomach, that comes from realising that because you sent that stupid confirmation email from your stupid phone on the stupid bus while you were thinking of the stupid history essay that was due yesterday you put a hyphen in the wrong place… and now instead of having a box of inflatable three-metre-high palm trees sitting on your doorstep you have three boxes of inflatable metre-high palm trees.’ 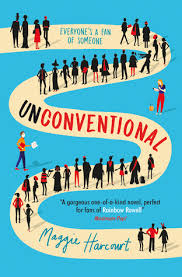 Lexi Angelo has grown up helping her dad with his events business. She likes to stay behind the scenes, planning and organizing…until author Aidan Green – messy haired and annoyingly arrogant – arrives unannounced at the first event of the year. Then Lexi’s life is thrown into disarray.
In a flurry of late-night conversations, mixed messages and butterflies, Lexi discovers that some things can’t be planned. Things like falling in love…

This is a reread, one of my first ones of the year. Which seeing as I read it in July/August is quite impressive. It’s a favourite of mine and I loved returning to the world of Lexi and behind the scenes of conventions.
Social media and popular culture often look down at cons, but then the stories are often told by people who just don’t ‘get it’. I’m desperate to take my mum to one for just half a morning, she might not understand why I want to meet various actors but she’d at least understand the buzz of the main floor. Because being at a con is a buzz, it’s a massive buzz and when you crew it I swear that buzz just gets bigger. I mean it’s also more stressful but it’s so much fun, and once you’ve done a couple cons stop being about just meeting the actors and the visiting the merch stands but it becomes meeting your con family. When it’s quiet I’ve been known to go to a table to hug the guest assistant and not care about the guest. I love my con family, it makes it so much more special and you get just as excited to see your friends as you do the guests. Or you meet a few smaller guest more than once and they remember you (it does help if you have something to stand out – Like a knitted dalek called ‘Phil’). What I’m trying to say is for people who don’t understand fandom and geeky stuff then they are unable to understand why we love conventions so much and when they find out just how big it can get their minds are blown. I mean have you ever told a muggle that San Diego ComicCon has over 130,000 people a day and is estimated to bring $140million to the city for the weekend.

The big cons are great and insane but the smaller ones, yes the guest lists aren’t as impressive but you’re also not being constantly pushed around by the thousands of people around you, and they are still great.
Lexi comes from a world where seeing people in Cosplay  most weekends is completely normal and it’s weird if they don’t, plus she’s able to be in charge of fairly major events even if the specifics are all geek related. Her dad’s conventions aren’t massive but are definitely not small. Having grown from just a bunch of people meeting and talking in a pub to booking out entire convention floors in hotels and most of the rooms.
That kind of experience shows she’s a really strong character when left alone in an area that she feels comfortable in, it’s refreshing to see that she still struggles at school because of the lack of confidence she has in that environment. I’m completely comfortable running a brownie meeting or even taking the kids away for a weekend (with a good team around me), but ask me to run a meeting at work, or to give a talk to adults and not kids? Nope, no thank you. When Lexi knows what’s she’s doing she’s top boss even though a lot of the ‘adult’ volunteers have known her since she was a baby and therefore you’d think it would be weird when she tells them what to do, but her confidence and her knowledge stifles that awkwardness from the beginning; she’s in charge and they accept it. Which is why it’s so much fun to see her flounder, because it’s all down to someone – often Aidan – catching her off guard, if she’s not expecting it, or isn’t in the con-mindset she loses that hard earned confidence.

The love story feels a bit forced in the beginning but it grows from teasing/dislike to friendship to more and I like it. I’m all for a good hate-to-love story and although Aidan and Lexi’s relationship can never be described as hate it’s definitely not love at first sight. In fact for Lexi her love of Aidan’s books take a bit of a hit once she realises who it was who wrote them. It feels more realistic than instant love which is seen so often, relationships, friendships or more, are difficult and insta!love is rare in real life.
I loved how Lexi’s personal feelings for Aidan impacted how she thought of the book he wrote ‘The PieceKeepers’ and how she had to make a conscious effort to separate the two, because that’s also a thing. You can LOVE a book but find the writer problematic and separating them is hard.

This is one of my favourite books, a real comfort read and something I’ll often pick up after a con weekend, the con in question for this particular reread was YALC/LFCC 2018…
I’m aware that was almost a year ago and is proof that I’ll never catch up with myself but I’m only 10 months behind and over halfway through 2018.

Seriously though, I originally picked this one up because it’s about working a con and not going to one – I’ve been working at various cons since 2015 and I love it. Reading this book is a perfect post-con warm down and stops me from getting post-con-blues.

I am head over heels in love with this book, it sums up the experience of cons for me so well even though I am just general staff and not in charge of organising anything. If anyone wants an idea of what it’s like to wear a ‘crew’ top this is required reading. Maggie Harcourt’s words perfectly explain the brilliant manic-ness of what it’s like to work behind the scenes of a convention.
In future when I reread this one I’ll finish it with a reread of ‘Theatrical’.

Am I glad I read it: Always
Did I enjoy it? Always
Would I read again? Definitely, at the latest it’ll be August 2019 before I reread it. Although writing this review has made me want to read it again.
Would I recommend? Always

PopSugar: Should be turned into a film, reread of favourite book, about a hobby, about a family (con family for the win!), includes a wedding.

Let me know if this is one that you’ve read before, what’s your favourite comfort read? have you ever worked a con before?

Hope your day is as good as it can be!

P.S My next review is ‘Street Song’ and is the first of my YALC hoard for 2018