‘Kat Wolfe awoke with a stiff neck and a creeping feeling that she was not alone.’ 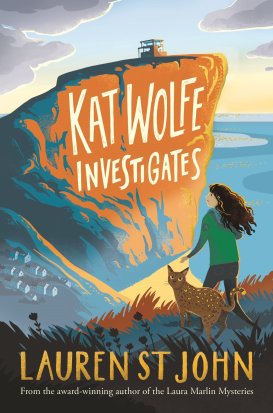 Kat Wolfe loves her new home in idyllic Bluebell Bay, especially as it comes with a resident wildcat. But when she starts pet-sitting for pocket money, she finds that beneath the town’s perfect surface lie some dark and dangerous secrets…
After a pet owner vanishes from his clifftop mansion, Kat turns to her new friend, Harper Lamb, for help. What began as mystery-solving holiday fun quickly turns deadly for Wolfe and Lamb. Can they count on their unruly animals to save their lives?

This is a really fun amateur detective story with a 12 year old character. It’s a well known genre (famous five etc) but with modern day sensibilities children are much less likely to have the run of the ‘wilds’ and the freedom to go explore. Lauren St John manages to capture the exciting-ness of exploration and solving mysteries of Enid Blyton but also captures what it’s like to be a modern day young girl/pre-teen with the technologies available to them.

I was a MASSIVE fan of Animal Ark when I was a kid and this feels like a natural progression of that series. The main character is the child of a vet and her parent(s) have their own surgeries and let her help out.
However those books were very similar and repetitive, once you’d read one you’d pretty much read all of them, and although this is only the first in this series I get the feeling that this isn’t going to follow the same pattern. It helps that the focus on this book isn’t the animals in trouble/the vet surgery and is instead based on a mystery that needs to be solved.
And it’s a good mystery, I was wrapped in this story from pretty much the very beginning and hadn’t worked out what was going one – which seeing as I’m twice the age of the intended audience either proof that it’s an impressive mystery or it’s proof that I’m terrible at mysteries.

Kat’s a fun character and her burgeoning friendship with Harper is written well. St John shows the gentle vulnerability in pre-teens and them working out the quirks in their friendship and how the relationship is going to go.
The love for animals rings through in every scene, it might not be the plot focus of the book. But it sits in the background and is the foundation of a lot of Kat’s decisions throughout the book. (This is where is differs from Animal Ark).  I love how it would be really easy for something like this to be her overwhelming character trait and and easy answer for answer question. And yet this isn’t the case, it’s simply a part of Kat’s character (and Harper) and while she might know that she’s going to be a vet when she grows up, it’s not her only feature. She’s curious and has a dogged determination, and these both are stronger traits.

The best compliment I can give this book is I easily/quickly forgot that it was an MG book and just got wrapped up in the story. The fact that I’m twice the age of the intended audience didn’t matter – I was still able to enjoy it.
I’ve pre-ordered the second book which comes out in April 2019

Did I enjoy it? Yes, I didn’t expect to enjoy it as much as I did.
Would I read again? Definitely. As it’s a quick read (as I’m not MG/target audience) I’m planning on rereading it before the 2nd one comes out.
Am I glad I read it? Yes
Would I recommend? Yup. This isn’t just an MG book, and one I would suggest if people want an easy read. It’s also one I’ve recommended to my Brownies

PopSugar: Should be turned into a film, amateur detective,

Hope everyone is doing ok, I’ve accidentally become a Brown Owl of a Brownie unit I only started helping out at at the beginning of the year. So that’s a thing… I mean I’m not taking over fully until September but that’s a thing which will probably take up a lot more of my time.
Which means I’m going to really have to MAKE the time to write this blog. I’m going to try to get into the habit of setting the time aside before I take over so that it’s not going to impact too much.

But hopefully I’ll get some more MG book recommendations from the girls, they’ve given me some great suggestions in the past.

As always let me know what you think of my review, if you’ve read this book, or if you want to read it.

P.S  My next review is ‘Gospel of Loki’ by Joanne Harris