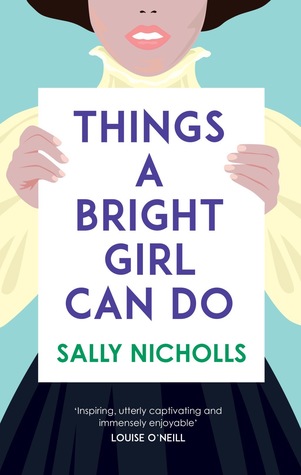 Through rallies and marches, in polite drawing rooms and freezing prison cells and the poverty-stricken slums of the East End, three courageous young women join the fight for the vote.
Evelyn is seventeen, and though she is rich and clever, she may never be allowed to follow her older brother to university. Enraged that she is expected to marry her childhood sweetheart rather than be educated, she joins the Suffragettes, and vows to pay the ultimate price for women’s freedom.
May is fifteen, and already sworn to the cause, though she and her fellow Suffragists refuse violence. When she meets Nell, a girl who’s grown up in hardship, she sees a kindred spirit. Together and in love, the two girls start to dream of a world where all kinds of women have their place.
But the fight for freedom will challenge Evelyn, May and Nell more than they ever could believe. As war looms, just how much are they willing to sacrifice?

This book was released for the anniversary of women’s suffrage and the beginning of women getting the vote. I’m a big fan of stories with intermingling characters, in this one the points of view change with each character giving you a closer insight into their lives and why they are fighting for women to get the vote as well as their views on the war. It’s more about Evelyn’s story and May and Nell’s as Evelyn is almost completely separate from the other two whilst May and Nell get together and therefore their lives are much more mixed. All three women/teenagers have their own reasons for wanting the vote and I feel this is important, it’s not just about showing that these characters all believe in women’s rights but it’s about showing why this is important for them and that people can all fight for the same thing for very different reasons.
For Evelyn it’s about not wanting to be pigeon holed into what society says she should do and being allowed to continue her education.
For Nell, it’s about being able to help provide for her family and to have a say in the situation that led them to where they currently are. As far as she was concerned growing up it was unfair that she was given a doll to play with on the steps and wasn’t allowed to play in the streets with the boys.
For May, it’s something she has always known as her mother is a suffragist and therefore she has been taken to ralleys and talks for as long as she can remember.

While I found it a bit of a slow starter I love how the different the three teenagers are even though they are all working for the same cause. This isn’t a bad thing it just means it takes more time setting the scene and the characters than others might, and with three different main characters, each with their own lives this is completely understandable.
Having a lesbian relationship in 1914 is a welcome relief, they aren’t found that often in YA anyway so having one set in the past where it was still illegal is a joy to read. May is very comfortable in her sexuality whilst Nell is only just learning about it and is much more timid even though of the two characters she’s the one who you would assume is more assertive as she is in other parts of her life. Its a nice contradiction, seeing women fighting for equal rights to men but still being ashamed of this part of themselves, although May is certain that it will no longer be illegal as soon as women get the vote, in the same way that war will surely end as no mother would agree to send her son to die.
It touches on the differences between suffragette and suffragist, which may seem small are glaringly obvious through the different paths the characters take, Evelyn is ready to give her life for the cause and will do anything to be heard. Whilst May and her mother stay away from those kind of movements believing it will only give the cause a bad name and they way to do it is through pacifist ways and that simply talking is enough. Both arguments have their pros and cons which are discussed in the book, it’s all very well being a pacifist in times of peace but when the whole world is at war it’s a lot harder and people will look down on you for saying anything about the war that isn’t about how ‘Our Boys’ will stop Hitler. And causing damage to buildings isn’t going to help sway people’s minds about your cause.
Although I thought it was a slow start it did speed up and the last half felt very quick as each teenager was forced to grow up because of the war and continued down the path that they were forging for themselves. I found the ending especially well done as it seemed fitting for all three characters, they had grown from the first page where two of them were only just learning about what it meant for women to not have the vote.

I picked it up from a display on books about women’s rights as it was one of the only fiction books, plus it was YA. And like I said having a f/f relationship in books is rare let alone in the early 20th century.

It’s a different type of story from a period where there is very little fiction, let alone YA fiction. There are lots of stories about WWI and the characters before and after but nothing about women’s suffrage that I have seen before.
Of the three characters I preferred Nell as she was assertive and also realistic, it’s fine to say in theory war is bad and people shouldn’t be fighting it but that is not the case in reality.  For me May’s beliefs are quite naive as they often are when people have grown up with them and haven’t ever properly challenged them. Evelyn is very different from the other two and showed how strongly she believed in the cause but also how scared she got at times and how much she struggled with the fight.

Would I recommend: Definitely worth a read if this area of history interests you, it’s a slow starter but the characters and their growth in their beliefs and as a person as worth sticking with it. Plus if you don’t like one person it’ll jump to another soon enough.

Once again I find myself asking for your comments and trying to work out a better way to close my reviews. So if you’ve read this, if it’s on your TBR, or if you know of any other fiction books on this topic please leave a comment.
I’d love to know your thoughts or get any recommendations.
As I’m currently 12 books behind my current read I’m hoping to maybe get a review a day up over the Easter period to try and catch up.

2 thoughts on “Things a Bright Girl Can Do – Sally Nicholls”